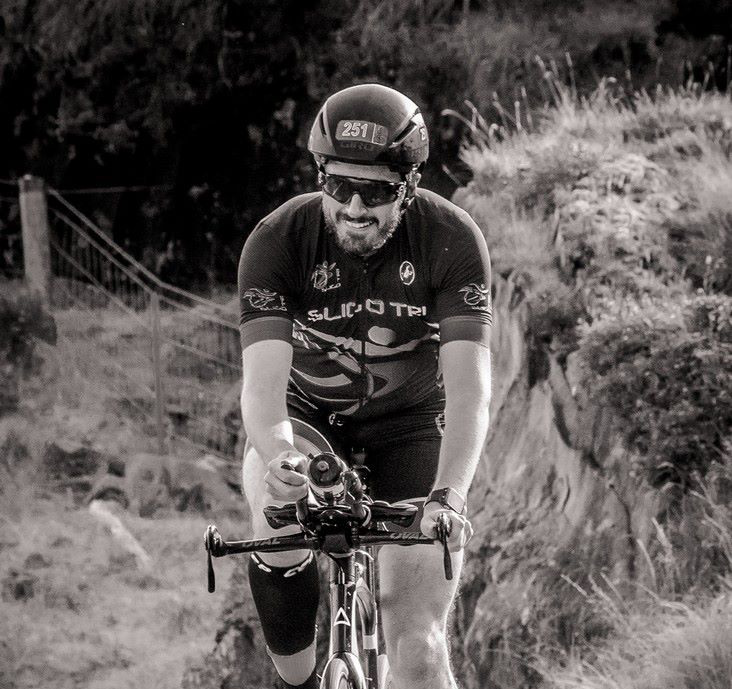 A few people have asked me for this so here it is. I got back into the swing of triathlon training this year after spending 2017 more cycling-orientated, focusing on the Marmotte (a hilly sportif in France) and A4 road racing. I’d heard about the Hardman – a 3.8k swim in Lough Leane, a 180k cycle around the Ring of Kerry and a marathon in Killarney National Park – from my Bottecchia cycling clubmate Brian Sexton. Not exactly an easy or fast course but the cycle leg really appealed to me and I was up for a challenge.

I’d tackled the half distance before in 2016 at Challenge Galway and raced Sheephaven Half this year as part of my build up for the event. However there’s a big difference between a half distance race and a full so I pulled together a crew of my girlfriend Emily, my brother John and my friend James to support me through the event (picture of us below). I met Brian and Conal Sexton at the pre-race briefing (Brian was back to defend his national title after winning last year and Conal was down to support Brian) and Jonathan Fahey. Three Sligo men in a field of about 60 athletes so Sligo was well represented.

3:45am: Definitely a time I’m more used to going to bed at than getting up at but this is the time my alarm went off in order for me to get up and get the porridge in to fuel the long day ahead. I was absolutely buzzing that morning and there was no way I’d get back to sleep so I spent an hour watching motivational videos on YouTube until Emily, John and James got up at 5am. They were also eager to go and we were all in way too good a mood for that hour of the morning. At 5:30am we headed down to T1 in Killarney Golf and Fishing Club. I set the bike up in transition and did all my usual pre-race checks as the sun rose on the far side of Lough Leane which was pretty spectacular (photo down below).

My goal for a 3.8k swim would be to swim 1hr 10mins which is about 1min 50sec per 100 metres. However the organiser Alan Ryan has a reputation for making the swim long and I’d heard rumours that it was over 4k so I knew I’d probably be on the upper side of my 1hr 10min target. 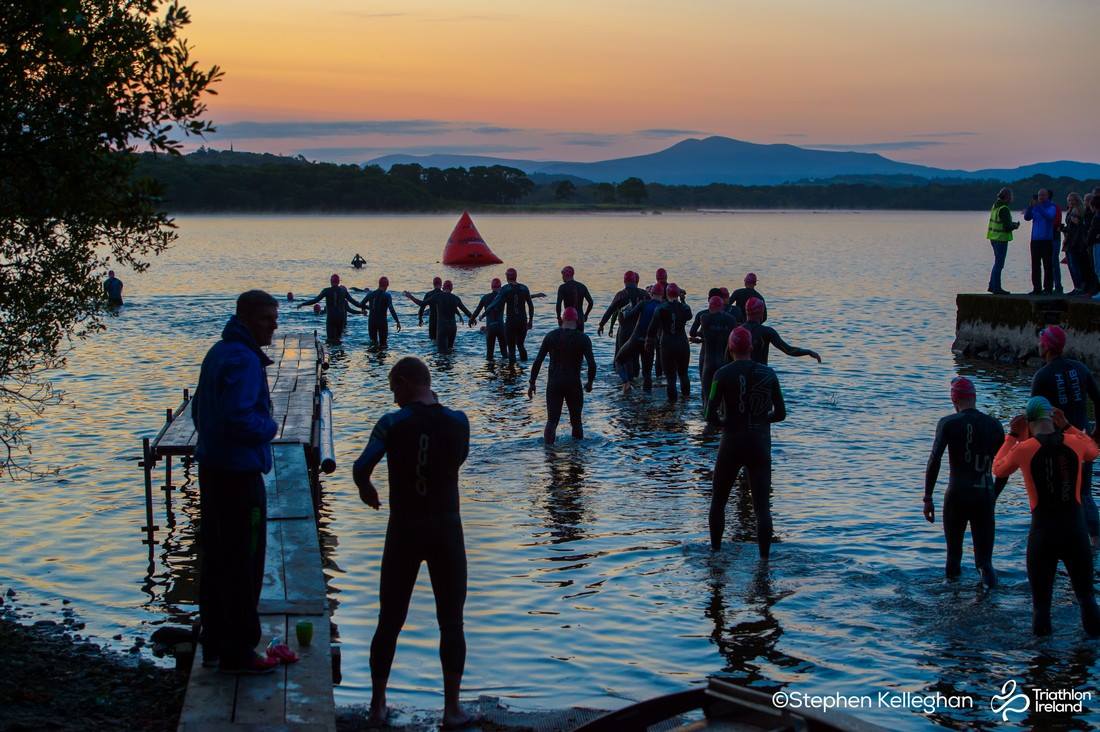 We lined up and entered the water at 6:25 and I wished Brian Sexton luck at the start line as he prepared to start the event for a fourth year in a row. The gun went off at 6:30 and we were off. The lead pack began to form almost immediately and for a split second I thought of trying to get into it. A few seconds later common sense prevailed and I let them go. I thoroughly enjoyed the swim. The sun was still only just rising and and there was a fog over the lake which was pretty amazing. I swam steadily at a decent pace for the first of the two 1.9k (ish) laps in a group of two trying to draft as much as I could. On the second lap I made my first mistake of the race. After turning at the first buoy we had to swim a 600m length over to the next buoy but the combination of the bright morning sun and fog over the lake made sighting the next buoy nearly impossible. I decided to put my confidence in the sighting ability of the swimmer in front of me and draft him but he couldn’t see where the buoy was either and was swimming directly into the sun.

At about the halfway point between buoys he veered left which I knew definitely wasn’t right and I saw another group of swimmers about 50 metres to my right. I began swimming in the direction they were going and eventually got close enough to make out the buoy and head for it. There was nobody going at my pace after that point so I ended up swimming the rest of the course by myself and getting out with a time of 1hr 17mins. Between the course being long and me probably swimming an extra 200 metres drafting someone going off course, I was happy with that. In T1 my support crew had a coffee waiting for me and I had a chat and a bit of banter with them for a couple of relaxed minutes before heading out on the bike course.

My main goal for the cycle was to keep the heart rate in zone 2 (140 bpm for me) in order to still have legs for the run but I also wanted to bike sub six hours.

Both Brian Sexton and Paul Rutherford had given me great advice warning me not to even think about cycling hard until I’d covered at least half the course. I hadn’t even left Killarney on the bike before I made my second mistake of the race. I had to pull up behind a tour bus going through Killarney and being immediately behind it I couldn’t see where I was going and turned off the course. I quickly realised I was going down main streets and not heading for the Ring of Kerry but by the time I got back to where I’d gone wrong I’d cycled another 3k and lost 7 minutes. Pissed off I put the head down and went to work making up some time disregarding Brian and Paul’s words of wisdom (sorry guys). For the first three hours of the bike I averaged 144 heart rate and just under 30km/hr. I was eating and drinking as much as possible but I felt the body putting more and more effort in to keep pace. For the second half of the bike my pace and heart rate dropped fairly substantially. The amount of elevation gain on the course is front loaded with Moll’s Gap and Coomakista in the first 90k.

On paper, with the second half of the course being less hilly, I should have been able to hold pace but I was in the hurt locker. Overall I spent 6hrs 17mins on the bike averaging around 28.5 km/hr. The bike course itself was absolutely breathtaking. The Ring of Kerry attracts thousands of cyclists every year and is a showcase of the beauty of the Irish landscape. I highly recommend anyone to do it (you don’t have to swim 3.8k first and run a marathon after if you don’t want to ). Having my support crew en route to offer encouragement was invaluable – it really gave me an added boost. When I was suffering the cycle provided entertainment when I needed it most. About 110 k into the course I passed a tractor run coming the opposite way of about 40 tractors who were also driving the Ring of Kerry for charity. I got the classic country lift one finger off the steering wheel salute from farmers for a solid two miles. Definitely one of the highlights of the race.

My goal for the run was just to finish the feckin’ thing! I’d never run a marathon and refused to acknowledge in my head that I had to run one. All I had to do was run three laps of the Killarney National Park and I’d as long as I wanted to do it.

I got into T2 knowing I’d overcooked the bike. I took as long as I possibly could to put my shoes on, have a bathroom break and have a chat with the Emily, John and James. I left T2 and headed out on the run course and actually felt fairly fresh running steadily around the first 14k lap. The national park threw a bit of everything at you. The course was a mixture of road, bike track, car park, forest trail, uphills, downhills, grass and loose gravel with all sorts of obstacles to navigate like families, mothers with buggies, tourists, weddings, horses, jaunting cars, cyclists…..basically you name it and I probably ran by it at some point.

At the beginning of the second lap I felt a twinge in my left calf and immediately took a Dioralyte. My body was quickly getting tired and putting one foot in front of the other was getting harder and harder with every step. I eventually made it back to T2 having walked the hilly sections and jogging the flat sections. Brian Sexton had finished at this point and was shouting encouragement as I passed through T2 for the final time. The last lap was a struggle but I knew with every step I was getting closer and closer to the finish line. With about 3k to go I got a sudden surge of adrenaline and motivation knowing I was so close and the pace began to pick up. I could hear the MC on the speaker from about 1k away. I spotted the finish line in the distance with about 300 metres to go. At this point I’d been racing for 12 and a half hours so seeing the end in sight was amazing.

I crossed the finish line in a time of 12hrs 31mins having run a 4hr 43 min marathon, pretty overcome with emotion after there being countless times that day and in the weeks and months previous where I never thought I would. I hugged Emily, John and James and managed to get a few photos before my legs went from under me and I sat down on the grass. Brian, who had won the race in a phenomenal time of 9hrs 31mins, came up to congratulate me. He took more than 30 minutes off his time from the previous year with his closest competitor coming in more an hour after him. Congrats to Brian on his win and another national long distance title. 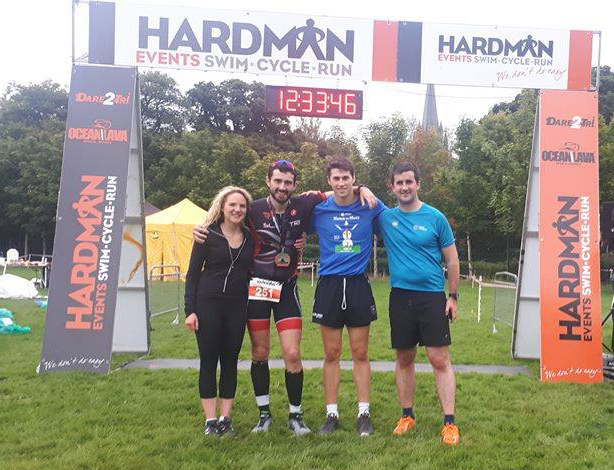 The following morning we all met for breakfast in the Castleross Hotel in Killarney to share war stories from the day before and eat the mother of all fry ups. I met Johnathan Fahey in reception who’d a massive smile on his face and was in great spirits after taking more than 1hr 40 mins off the last Ironman he’d done in Wales, finishing in 13hrs 27 mins. The breakfast felt like an intimate family occasion, recognising so many of the field from the day before. One thing I couldn’t get over was how there was only 60 people racing. This was a National Championship race in a fabulous part of the country with all three legs being bucket list items in themselves. To anyone with ambitions of Ironman Cork next year, I urge you to consider this course. It won’t disappoint!

One thing I completely underrated was the support structure I needed for this race. With about six weeks to go I didn’t have the confidence in myself to think I’d finish and started telling people I was pulling out. It turns out when you tell people you’re doing an Ironman they think you’re mad – surprisingly enough! The majority of people who I told I was pulling out thought it was a great idea but a small minority had seen the work I’d put in and told me I’d be mad to pull out. To those people who got me committed again, thank you so so much for your support and your belief in me. I won’t name names but you know who you are. Couldn’t have done it without ye. Sligo Tri until we die! 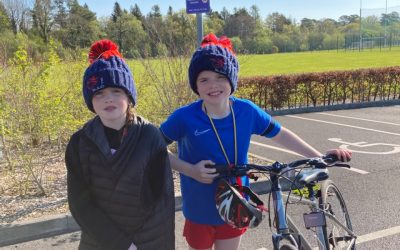 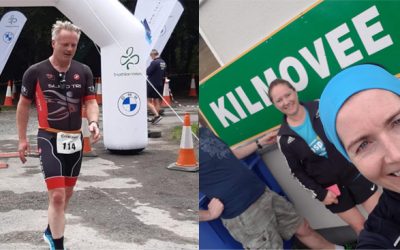 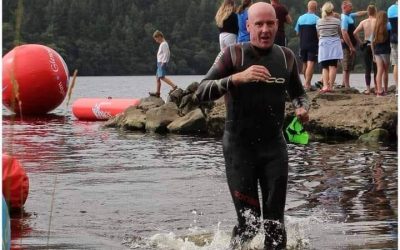